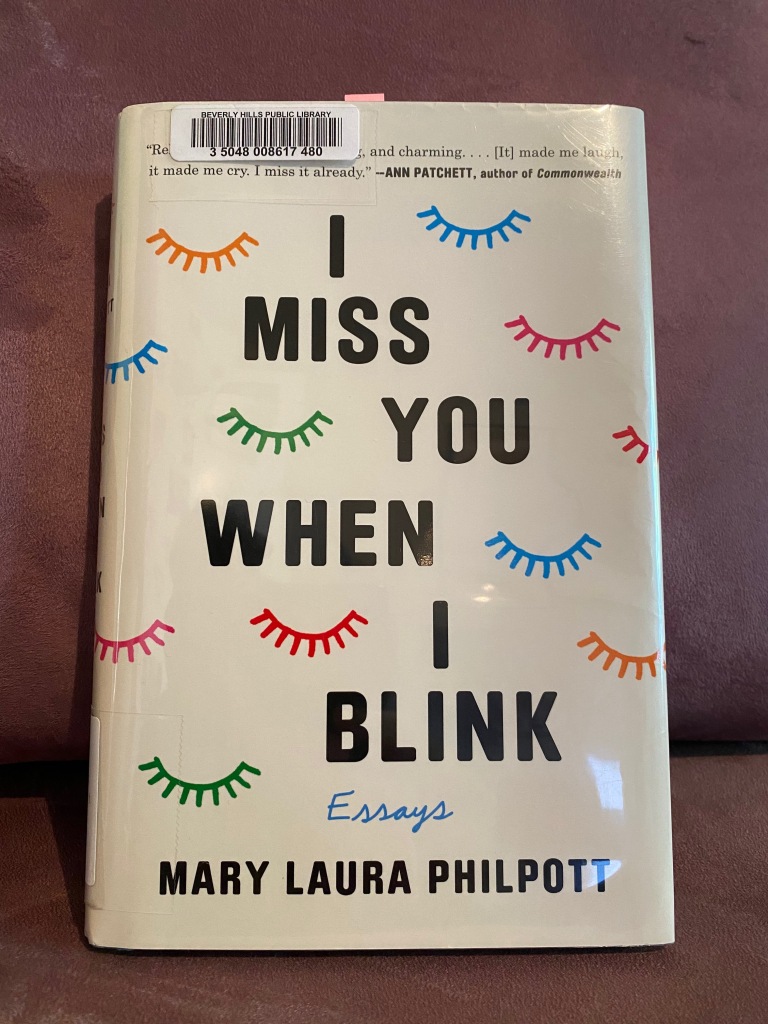 There were so many parts of Mary Laura Philpott’s collection of essays, I Miss You When I Blink, that felt like she wasn’t writing about her life, but mine.

That’s part of what makes a good book. You get lost in the story. Whether it’s fiction or non-fiction. Whether it’s based in the past or the present, or even the future.

“If you’re twenty-three and twenty-one and you tell me you’ve just gotten engaged, I will tell you that you’re insane and too young, because when I look at twenty-one- and twenty-three-year-olds now, they look like babies. But at the time, when I was twenty-one, I could not foresee any reason not to marry him. I pictured the timeline of my life ahead of me – inasmuch as a twenty-one-year-old can look at her future life, which is to say in hazy, imaginary terms – and saw no circumstance in which I’d want not to be married to him.”

(Side note to my readers – when my husband and I were married, he had just turned 23, I was a few weeks shy of turning 23.)

“I felt like vapor in need of a shape to contain me. Who was I if I wasn’t that person busy with a hundred tasks and a dozen phone calls to return every day? Who was I if no one needed me to make their lunch anymore? And what good was I – what quantifiable measurement could be there of my worth – without these value systems to calculate it?
These questions didn’t excite me. They terrified me.”

“That’s one of the strange things about life: Even when we know how much worse it could be, everyday pains are still pains.”

“But one person’s more-sad doesn’t cancel out another person’s less-sad. The fact that an earthquake took out a whole city block doesn’t make it hurt less when you trip and snap your ankle.”

“You wish you could take a break from carrying everything. It’s all so heavy. You are so fucking tired.”

“What I can say is that my early forties are ticking by at an alarming rate. The idea of making my days count makes me feel like I’m not wasting them.”

“Children hold you accountable on their own. They keep a tally, and they remind you. There’s no dodging these little accountability officers. They report for duty – and report on my duties – every day.”

“But maybe the trick isn’t sticking everything out. The trick is quitting the right thing at the right time. The trick is understanding that saying, ‘No, thank you’ to something you’re expected to accept isn’t failure. It’s a whole other level of success.”